PHP versions have a number of stages in their lifespan.

Following each versions initial release the php branch will be supported for two years. Within this period of time bugs and security issues are reported, fixed, and released.

Once the three years of variable support has ended the branch is officially end of life and no further support is provided. 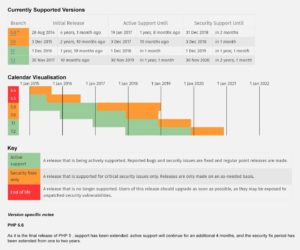 What does this mean for the Magento community

Ready to get started?

We’re based in the UK, in the heart of Lincoln.
Let's talk.